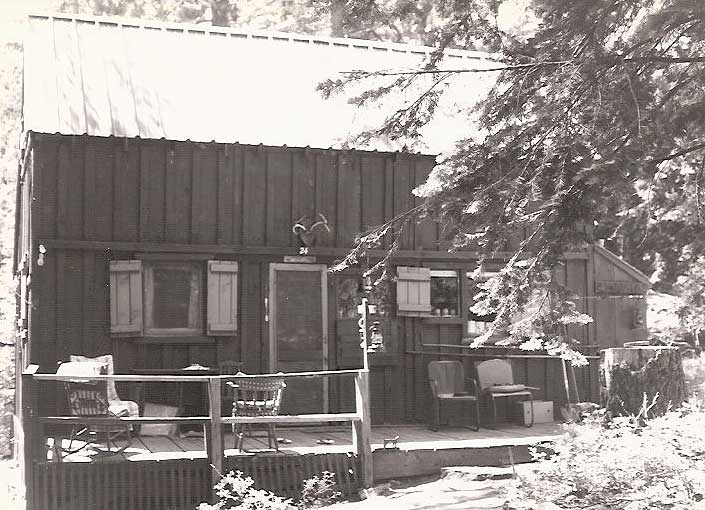 The Meyer cabin was built in 1925 by Johnny and Louie Wren on lot #24, West Mineral King. The initial cabin was built from raw lumber from the Atwell Mill. Much of the board and batten lumber on the cabin exterior today is the original lumber used for its construction in 1925. The exposed interior beams used for the second story floor were roughcut and show the saw marks from the early milling operation.

The cabin was constructed with two floors. The bottom floor was used for cooking and eating. The second floor was used for sleeping quarters. There was a metal ladder arrangement on the outside west wall which led to an upper level exterior door to the second level. The outhouse was the only existing toilet facility; up the trail behind the cabin.

John and Louie Wren lived in Mineral King in the hot summers to get away from the heat, the mosquitoes and the malaria that the early farmers of the valley contended with during that period of the year. They used the cabin until they were too old to go into the high country.

In 1945, Hubert E. Sandidge of Lemon Cove, California, purchased the cabin from the Wren brothers. Mr. Sandidge rebuilt an outside porch deck on the west side of the N/S length of the cabin. The Sandidge family used the cabin until 1953 when they sold it to Emma Carolyn and Alvin H. Meyer in August of 1953.

In the pursuing years Emma and Alvin added a bedroom, a bathroom, a shower, and a shed on the northwest side and end of the cabin. The front porch was rebuilt numerous times due to snow damage. An outside patio (of Sierran rock), a barbeque pit and a firepit were built in the summer of 1954. During the winter of 1983-1984 the snow pack was so heavy it crushed the roof of the shed and the roof of the center and north end of the cabin. The cabin was repaired the following summer by Bill Maze and crew. The cabin was re-leveled, reinforced, and sub-flooring and a bedroom were added to the open porch area on the southwest corner of the cabin. The roof was restructured with the cedar shingles removed and a prefab metal roof installed.

When Alvin and Emma purchased the cabin in 1953, there was, and is still used today, a large cast iron wood stove in the kitchen area, a 3 ft. x 5 ft. ice box, and a nice-sized pantry. The icebox was placed outside on the open porch and was a checkpoint for the passing bears. It was left outside on the porch so, hopefully, the bears would not tear into the cabin and have access to other food items on the inside.

Each night, Emma would place an old piece of canvas with old pots and pans piled up on top of the icebox. We would sleep upstairs and when the bear would stop and check out the icebox, it invariably would pull the pots and pans down on top of itself with a loud crash and bang, waking up everyone. Mom Meyer would jump out of bed, grab her broom, head out the door and down the outside ladder, and chase the bear up the mountain with her long nightgown flowing behind her. On moonlit nights she would chase the bear up the trail behind the cabin swinging her broom and shouting at him. On dark nights, she would just pick up a pot or two and bang them together. With the purchase of a propane refrigerator in later years, this ritual disappeared.

When the ice melted in the icebox, which was often, we would use a breeze box, which was a wooden orange crate with screen on the sides built with a hinged door. We would put our bacon, butter and other perishables in the breeze box and hang it in a large tree in the shade with a rope connected to the top of the box. We had a bell hung on the bottom of the box, so if anything was moving the box the bell would ring, sounding an alarm, and we could check it out. Once again, the refrigerator retired the breeze box.