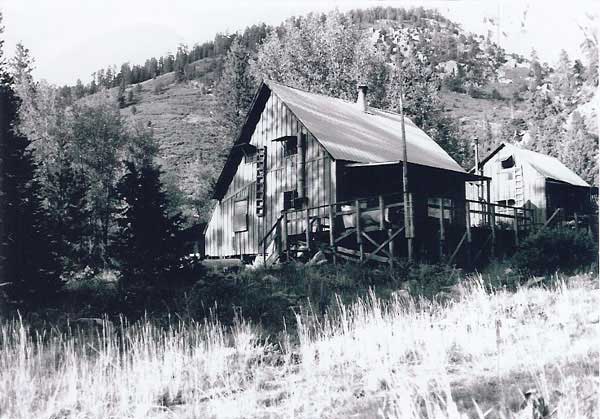 N.N. “Doc” Redford, was a pharmacist at the Exeter Drug Store. He and his wife, Sue, built the modern cabin on an old miner’s cabin site in 1931. Doc’s carpenter was Bill Garret whose work on it repaid a store charge account. Doc liked taking friends up to his cabin in the winter to ski. During his summer stays he was dubbed “Mayor of Mineral King” for many years. Doc often took care of ill and injured people in the valley when a doctor was not available.

The original cabin was built with an indoor bathroom and had a generator in a shed behind the kitchen. It was wired for electricity when it was constructed, not as an afterthought. “It must have been something to have electricity in the woods in those days, “ current co-owner Dan Voelz says. “Real uptown!”

Ca 1939, the cabin was acquired by Frank and Alice List, close friends of Doc and Sue Redford. Frank was a farmer in the Exeter area. He made modifications to the cabin in the late 1930’s to early 1940s. A kitchen was added on the north side and a long dorm constructed above the kitchen and bathroom. The roof was pitched at a higher angle and increased in height. Frank used some of his farm hands to do the work. Dan Voelz spent portions of two summers under the cabin fixing the foundation. “I can attest they weren’t contractors,” he notes.

In 1951, the List family moved to a ranch outside Carson City, Nevada. Frank and Alice remained there the rest of their lives and their son, Bob became a Nevada governor. During a heavy winter in 1952, the original front porch collapsed and a small stoop was constructed. That was the only improvement made for several years, as the Lists seldom returned.

“We used the old generator when we came to the cabin in the middle fifties,” Dan recalls. “Lights out at nine.” The generator proved to be noisy and “quite capricious”, however, and was removed in the late 1950s. White gas lights and kerosene lanterns were used until 1995 when Dan installed propane lights downstairs. Kerosene lamps still are used in the upstairs sleeping area.

Other modifications made since the Sellars-Voelz ownership, included a new porch constructed from railroad ties with a twelve by two railing; repairs made to the kitchen following a fire; and after a heavy snowfall in 1969 caused much structural damage, new windows were put in on the south wall and in the kitchen. In 1983, snow damaged the porch again and carpenter Bill Maze constructed the current one.
Today’s Redford cabin now stands as a one and one half story, three bay frame structure with vertical board and batten siding on the outside and knotty pine paneling inside. Its metal roof has high side gables with exposed rafters. The foundation is wooden posts set on rocks, with the open front porch facing south.

Greg Sellars and Dan Voelz now maintain the cabin and are working to refurbish the interior according to its original construction. They are replacing modernizations with original styled wood paneling in walls and ceilings, and are replacing window casings to match the originals. They also purchased a replica of the original stove which was a combination stove using both wood and gas.

“We are trying to put it back to is original 1930s condition with appropriately dated appliances and woodwork,” Dan says—a true labor of love.