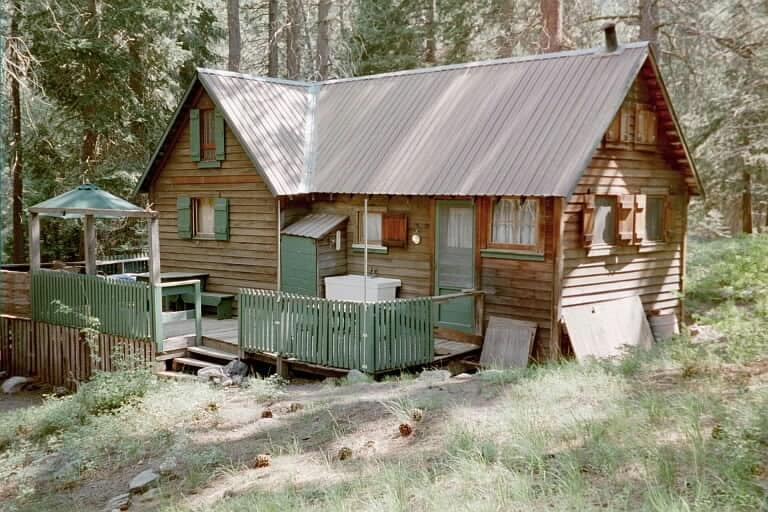 “When I was a youngster in Mineral King, I came upon a little one room cabin where I could see through cracks in the siding into the empty room. I didn’t realize then that this was where our future cabin would be. In the 1950s, after Mr. Kirk had rebuilt and expanded the structure into three nice rooms, upstairs sleeping quarters and a broad outside deck, my mother bought the cabin. Too costly for her pocketbook, she said, but she did it for her family’s enjoyment.” Leslie Hart Avery

(quote taken from “The Cabins of Mineral King” by Jana Botkin and Jane Coughran, Cabinart Books, 1998)
Elizabeth Avery, Leslie’s mother, bought the cabin in 1956 for somewhere around $5000. The structure of the cabin has remained much the same since its last sale with only minor repair and maintenance work. The Avery family traces its roots in the valley back to 1898 when the Hart family began camping alongside the river. Edwin Finnley Hart married Martha Ellen Frans. They had seven children. The family camped for nearly 25 years alongside the river before building a cabin. According to Leslie Avery, Mrs. Hart felt that after nearly 25 years spent camping for a month at a time it was just about time for some of the conveniences of a cabin. The cabin they built in the 1920’s is now the Koontz cabin and is located directly above their 25-year camping spot.

The Harts’ daughter, Elizabeth Rebecca, married Leslie Avery. They and their three children Leslie, Elizabeth, and Helen spent many summers heading up the Mineral King road in a Dodge touring car with a wide runningboard. This served as transportation for their small dog, Bootsie, whose preferred seating arrangement was stretching out on the runningboard for the three-hour drive. They camped at the Hart camping spot and used Edwin Hart’s cabin until Elizabeth bought the Kirk cabin. By that time, Edwin and Martha’s children had spread out to six different cabins.

The Avery cabin is currently used by Leslie and Elizabeth Avery’s three children and their extended families.

Edwin Jr. Hart m. Belle Hartzel: Edwin Jr. and Belle had two daughters, Lorraine and Nadine. Nadine later married Paul Bissiri whose father Attilio had built the Bissiri cabin back in 1927. Edwin left the original Hart cabin to his grandson Mark who later sold it to the current owners, the Koontz family.

Homer Hart m. Beulah: Homer bought a cabin just to the west of the original Hart cabin. Homer and Beulah’s only daugther, Marilyn Hart, married William Reynolds. Their two sons and daughter, along with their grandchildren, still occupy the cabin today.

Francis Hart m. Edward Hester: The Hesters had two children, John and Dale. They owned a cabin across the road from the other Hart families. They later sold the cabin to the Ewens, and it is now known as the Hester-Ewens cabin.

Hugh Hart m. Jesse: Hugh and Jesse had three children, Kenny, Billy and Dick. They bought their cabin from the Campbell’s. It was located directly between the original Hart cabin and the Reynolds cabin. In 1972 it was sold to Jim Parks.