History of the Living History Community

The Mineral King Valley holds a rare cultural experience. For within it lies one of the west’s few truly historic alpine settlements that is still alive today. For over 130 years, the Mineral King Valley’s evolving community has grown, flourished and succeeded in a constant struggle for survival. It has become a distinct cultural identity celebrating the tenacity of our western heritage. The Mineral King area contains more facets of man’s history in our western mountains than any other one place in the Sierra Nevada. Community is the tying thread of that history. 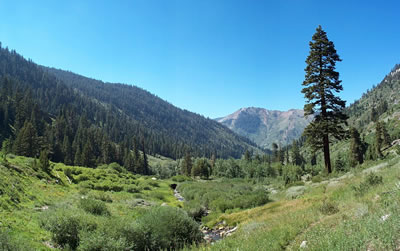 It all began several thousand years ago when a group of immigrants, probably originally from Siberia, began to settle in the Tulare Lake region of the San Joaquin Valley. This was an area that had long been the home of what have been named the ancient Hokan people.

One band of these Penutian immigrants, the ancestors of what became the Yokoch, or Yokuts people, settled in the foothills of the Kaweah River. During an extremely warm spell beginning around 6,400 years ago they began to use the higher drainages of the Kaweah River as summer hunting and gathering grounds.

By at least 3,000 years ago, a Yokuts subgroup named the Wukchumni had permanent villages in the Terminus Dam area below Three Rivers and had claimed all the waters of the Kaweah’s East Fork as their territory. They created a summer settlement in the Atwell Mill-Silver City area with several camp sites on Mineral King’s valley floor. There they gathered herbs, bulbs and grasses and killed deer, mountain sheep and bear. They went to Hockett Meadow. They hunted in the White Chief Bowl. They forged trading trails linking them to the Paiute people on the east side of the Sierra summit who had precious obsidian to barter. They ground acorn meal and seeds they gathered in the granite rocks beside their forested summer homes.

It was hundreds of years before another group of people came to share these East Fork summer camps. Around 500 to 700 years ago, some new immigrants appeared from the east side of the Sierra to claim land for their own villages above the Yokuts communities. Descended from the Great Basin Numic peoples, the Monache or Western Mono had some reason to cross the Great Western Divide and try to eke out an existence in the higher foothills and mountains.

No clues as yet have told us why. The Wuksachi group of these Monos settled along the Kaweah’s North Fork, and on Eshom and Lime Kiln Creeks. The Patwisha, or Balwisha, settled above the Wukchumni Yokuts with their principal villages at Slick Rock below Three Rivers and at Hospital Rock near Ash Mountain. It was these people who the area’s first “modern” settler, Hale Tharp, first met in 1856. It was these people who for some unknown period of time apparently abandoned the summer camps in Mineral King.

When the first European-American adventurers worked their way into the headwaters of the Kaweah’s East Fork, they found no active villages or campsites and the wildlife had no fear of them. It seemed there had been no occupation of the Mineral King Valley for many years. Stories of the Wukchumni and Potwisha told of a tabu.

Whatever that tabu was, it evidently created the only time in thousands of years of occupation that the Mineral King Valley did not have a summer community.