The Mineral King road follows a unique historic corridor to the Southern Sierra Nevada’s past. From the time the first Yokuts people explored the canyons of the Kaweah River, it has provided access to the high country of the Sierra. Today, the road corridor is preserved as The Mineral King Road Cultural Landscape District, with nomination to the National Register of Historic Places. 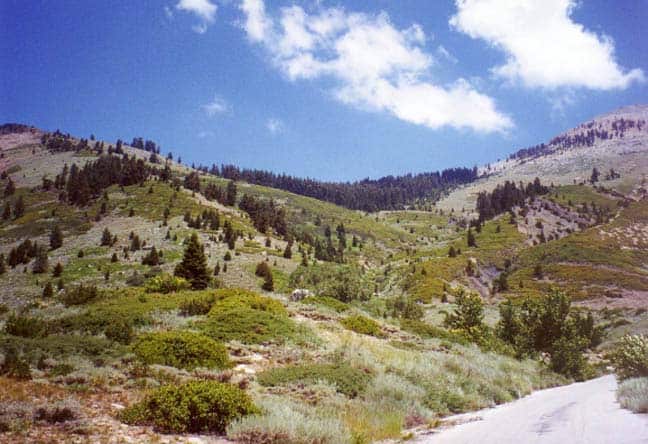 The loss of old community structures in the Mineral King Valley always has been a threat. Time, natural forces, government policies, and commercial considerations, all take their toll. Conservation movements beginning in 1874, work to preserve all-natural resources, often to the detriment of the cultural resources contained on the same lands. In Sequoia National Park, the preservation of natural resources is paramount to any other consideration.

Not only were crushing snows, avalanches, wet year bogs and fires taking their toll on the old buildings, but increasingly, the changing concepts of a younger generation were threatening the then 67 year old community. What had been right for an 1870s mining settlement no longer was acceptable for a 20th century resort and vacation town.

Private enterprise and government oversight both were threatening the heritage of the past. Three of the four unpatented mill sites on which most of the Mineral King community first lay had been reclaimed by the Forest Service, and along with permits issued for cabin occupancy under the 1915 Term Occupancy Act. Many of the old cabins and mining era structures had been torn down and their materials used for new buildings. Not only were the old cabins being renovated, but several of their lots had been subdivided, and new lots were opened after a 1924 land survey.

But it wasn’t just new building policies that threatened the existence of the already historic community. Since its growth into a busy recreational enclave in the 1880s, conservation forces had expressed their own interests in protecting the area as a natural preserve rather than as a cultural heritage.

The trend toward conservation began in California in 1874 at the height of the first Mineral King mining boom. In that year, the California legislature made it illegal to damage any Sequoia big tree over sixteen feet in diameter. The lumbering of Sequoias for shakes, rails and timbers for the Mineral King mines was not affected by the grandiose proportions of the limits, but the state law came as a harbinger of future restrictions.

By the beginning of the second mining boom of 1879, other forces were working to protect the big trees and wilderness areas of the Sierra Nevada. The first efforts of George Stewart of the Visalia Weekly Delta and a group of other concerned citizens that began a movement that finally resulted in the 1890 creation of Sequoia and General Grant National Parks.

While several proposals between 1879 and 1890 had included Mineral King in the scope of the new park, because of its mining potential and private community, the valley was left out. However, immediately, Sequoia’s first superintendent, Captain Joseph Dorst, recommended in 1891 that park boundaries be extended to include Mineral King and vast areas of the wilderness high country.

Such recommendations were to continue throughout various Sequoia Park administrations. Worried that inclusion in the park would stop any possibility of future mining activities, and aware of a park antipathy toward private enterprises on public lands, the people of Mineral King fought any attempts to include them in the park. In an effort to influence park policies in 1894, Arthur Crowley had a petition signed by dozens of Visalia citizens requesting he be designated, “Guardian of the Sequoia National Park.”

However, the park was not Mineral King residents’ only worry. A year earlier, Mineral King had been included in the newly formed Sierra Forest Reserve, and the Department of Interior began to look at possible infractions of mining and homestead laws. In 1904, Forest Reserve Superintendent, Harrison White, recorded Crowley’s misuse of the Empire Mine mill site as a resort.

Unwilling to accept defeat, Crowley took his case to court and four years later was granted full title to the land, assuring continuation of his resort. Unfortunately, the rest of the community could not be granted such peace of mind.

With the creation of the National Park Service in 1916, conservation of both natural and historic sites and objects on public lands was mandated. However, from the beginning, Sequoia National Park’s policy made it clear that the preservation of natural resources was paramount to any other consideration.

The Mineral King road follows a unique historic corridor to the Southern Sierra Nevada’s past. From the time the first Yokuts people explored the canyons of the Kaweah River, it has provided access to the high country of the Sierra. Today, the road corridor is preserved as The Mineral King Road Cultural Landscape District, with nomination to the National Register of Historic Places.

The East Fork of the Kaweah River has been used as an access route to the high country of the Southern Sierra Nevada for possibly 3,000 years. The early Yokuts Wukchumni people, who had a village below Three Rivers, claimed all the waters of the Kaweah River in their territory.

No major trade trails followed the steep East Fork canyon up to Mineral King. There undoubtedly were some early hunting and exploratory pathways, but the Yokuts chose easier trading routes to the east side of the range.

It wasn’t until the Western Monache Patwisha or Balwisha people moved into the higher foothills of the Kaweah River drainage around 1,000 years ago, that a trade route was developed into the Mineral King area. Even then, it did not go up the difficult East Fork canyon. Evidence indicates it ran a circuitous route up the Middle Fork, around Paradise Ridge or over Timber Gap and into the Mineral King Valley, then south over Farewell Gap to the Kern River. It never became a major trade route, but provided a summer high route to the Kern and Owens Valley. Owens Valley obsidian still can be found throughout the Mineral King Valley.

A consistent trail up the East Fork canyon probably wasn’t developed until around 500 to 900 years ago. Around that time, a warm spell gripped the California landscape with two severe droughts that lasted over 200 and 140 years each. During these drought periods the people of the foothill regions sought summer refuge in the highlands. On the Kaweah River, local Patwisha family groupings ran trails up the South and East Forks to summer camps in the coniferous forests. Prominent landmarks along the way were named, including Sawtooth Peak which they called kah-did-it.

One of the lower family camps on the East Fork was at today’s Cabin Cove, where the Kaweah’s precipitous canyon rises into a fairly level area of cool, forested and creek-fed lands.

Several other camps lay along the trail that evidently wound up the canyon along today’s road corridor. There were aboriginal camp sites at Atwell Mill, Silver City, through Faculty Flats, near the current ranger station, and at Cold Springs Campground.

In the Mineral King Valley, there were campsites near the Sawtooth Trailhead on Monarch Creek, and at the old Sunny Point Campground. In the upper part of the valley, obsidian flake scatters and several arrowheads have been found in areas that apparently were hunting camps.

Each separate major camping area probably was the summer home of one extended family. Pine nuts were ground at bedrock mortar sites. Waste was piled into what have become known as middens. Obsidian acquired in trade with the Eastern Monache was shaped into arrowheads and other tools.

In keeping with their own social customs and the ancient customs of outdoor camping, we can imagine what summer life in the Mineral King area must have been for the Patwisha Indians. There would be none of the conical houses built for foothill living, though perhaps a bark lean-to might be built for protection from summer storms.

Warm clothing for the chilly mountain mornings and evenings would either be carried up the trail or manufactured on the spot. A scraper found in the Atwell Mill area tells us deer were hunted not only for food, but also for their hides. A rabbit-skin blanket was almost always a necessity. Buckskin breech clouts, shirts and skirts would be worn both for protection and some warmth.

The days would be filled with pleasant mountain activities. The women would forage for herbs, tubers, nuts and insects. They would gather wood, grind meal, make mush, cook, tend babies, and visit. The men would hunt, fish, fashion and repair obsidian and rock weapons and tools. The children would play together and help with chores.

All would play gambling games and perhaps some ball games. They would visit each other’s campsites. Perhaps there would be races and wrestling matches. There would be tobacco-smoking and story-telling around a late afternoon campfire. There would be singing and perhaps the music of a four-holed flute and split-stick, cocoon, or deer’s ears rattles. On occasion, there might be dancing.

There would be play and bathing in the cold, clear river. There would be explorations by the children and young people and participation in the ancient game of hide-and-seek. There would be love and hurts, laughter and tears, discomforts and joys. There would be wonder and delight in the beauty of the remarkable Mineral King world.

(Information for this article was gleaned from several sources by Louise Jackson. Principal among them are: Jennings and Kisling, ARCHAEOLOGICAL RESOURCES OF THE MINERAL KING DISTRICT; Steward, INDIAN TRIBES OF SEQUOIA NATIONAL PARK REGION; Stewart, THE YOKUT INDIANS OF THE KAWEAH REGION; Gayton, YOKUTS AND WESTERN MONO SOCIAL ORGANIZATION, Heizer, TRADE AND TRAILS.)