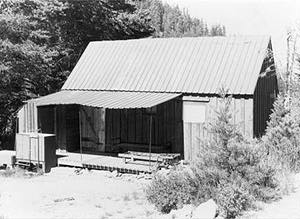 The Barboni Cabin is one of the oldest remaining cabins in Mineral King. It has survived essentially unchanged since its construction in 1905 by Jim and Nettie Howard. The cabin possesses an interesting history and is located near archeological remains dating from the Empire Mine era. The current permittees, the Barbonis, are descendents of the Howards.

The Barboni cabin has retained a historic appearance that epitomizes the rugged Mineral King lifestyle. The cabin’s original portion consists of a rectangular, one-room frame structure. It has vertical board and batten siding, and a standing seam metal roof. All original wood was purchased from Atwell Mill.

A kitchen was built over the east porch in 1925, and a sleeping porch and shower were added in 1935. The only outbuilding on the property is a side gable, board and batten privy.

After years of camping out on a nearby lot, Jim and Nettie Howard built the Barboni cabin in 1905. It was a one-room structure, typical of the time. According to the wife of the Howards’ nephew (Frank Barboni), the original structure had no windows. The cabin did, however, have two doors, a wood stove for heating and cooking, and a porch opened to scenic views.

The cabin was used as a summer retreat. In 1910, the Howards took their 12-year old nephew Frank Barboni to Mineral King for the first time. Horses and mules were used for transportation with Frank riding a mule. The trip took a grueling three days.

In 1925, Frank brought his wife Dorothy to Mineral King. That summer, they added a kitchen to the cabin. Water was still obtained from a faucet outside the cabin. Dorothy noted that the water was kept running at all times, and a wash tub was kept beneath in order to keep fruit, vegetable and milk cool. They kept other perishables in a screen “safe” which was hung in a Lodgepole pine tree near the cabin.
In 1933, Nettie conveyed ownership of the cabin to Frank and his brother, Louis Barboni. After her death, a new permit was issued to the brothers. They continued using the cabin every summer, squeezing in their expanding families as well as friends and their children. In 1935, the brothers added a sleeping porch and shower.

After Frank’s death in 1964, Dorothy spent a decade in the cabin, making it her home. The Barboni cabin became a common stopping place for tourists and hikers seeking directions or a drink of water.

The First Cabin Lease to be Threatened:

Before Mineral King’s entry into Sequoia National Park, the Barboni cabin was threatened with extinction. In the mid-1970s, during planning for the Disney resort, Sequoia National Forest decided the lot was needed for expansion of the Monarch parking area. For two years the Barboni family fought to keep their historic cabin:

Dec. 27, 1974: Forest Supervisor, John Leasure, notifies L.C. Barboni that his special use permit will be revoked on Dec. 31, 1975. All improvements must be removed by June 15, 1976.
Jan. 27, 1975: L.C. Barboni files a request for administrative review of the decision.
Feb. , 1975: The National Forest Service serves notice of termination of the Barboni Special Use Permit in order to provide additional parking for the proposed resort development.
April 22, 1975: A hearing is called for review of the termination of the lease.
August 7, 1975: The National Forest Regional Forester issues a decision stating revocation of the lease is justified. The termination date of the lease is postponed to Dec. 31, 1976.
April 7, 1976: Thomas C. Nelson, Deputy Chief of the U.S. Department of Agriculture, determines that the selection of the cabin site for public parking is proper and in the public interest. However, with lawsuits pending against resort development, all actions regarding the development are put on hold.
Nov. 17, 1978: Notice is served to L.C. Barboni that President Carter has signed a bill transferring the Mineral King area from the Forest Service to the National Park Service. This act transfers the jurisdiction of the Barboni lease to Sequoia National Park. Renewal of the lease is granted for 1979.
March 15, 1980: Dorothy Barboni requests permission from the superintendent to keep the cabin for that year. The request is granted and all the cabins on leased land in Mineral King begin their decades long struggle to remain a living historic community.
Residents:

Jim and Nettie Howard were owners of a ranch east of Visalia. According to Dorothy Barboni, at one time Nettie was also owner of Bear Ranch, a ranch along the old road to Mineral King. The Howards were friends of Jeff Davis who owned a cabin in Mineral King. This cabin had once been the butcher shop. In the late 1800s, Davis had invited the Howards to visit. They visited each summer for several years, camping next to the cabin. In 1905, the Howards received permission to build a cabin on a nearby lot.

Frank Barboni was the nephew of the Howards. He was raised in San Jose. For years Frank spent his summers with the Howards on their ranch . He first visited Mineral King in 1910, and was subsequently a frequent summer visitor to the valley. As an adult, he led an annual pack train into the back country. According to his wife, Dorothy, “…if, when he returned to the cabin and had not played poker and read a book he had taken, he figured he’d had a perfect vacation.”

Dorothy Barboni was raised in San Francisco. She first visited Mineral King in 1925 after marrying Frank Barboni. She became a regular summer resident in the cabin. After Frank’s death in 1964, she resided in the cabin for ten years, earning a reputation as the valley’s custodian. During the Disney controversy, Dorothy gathered 3-4000 signatures to “Keep Mineral King Natural” for the Sierra club. She also planted redwood trees around the cabin, gathering seeds from Atwell Mill. It was not uncommon for her to board strangers during storms. For years she was an invaluable source of information and education.
Information on site structure and history was derived from the Mineral King Preservation Society files and an account of an interview with Dorothy Barboni in 1980.