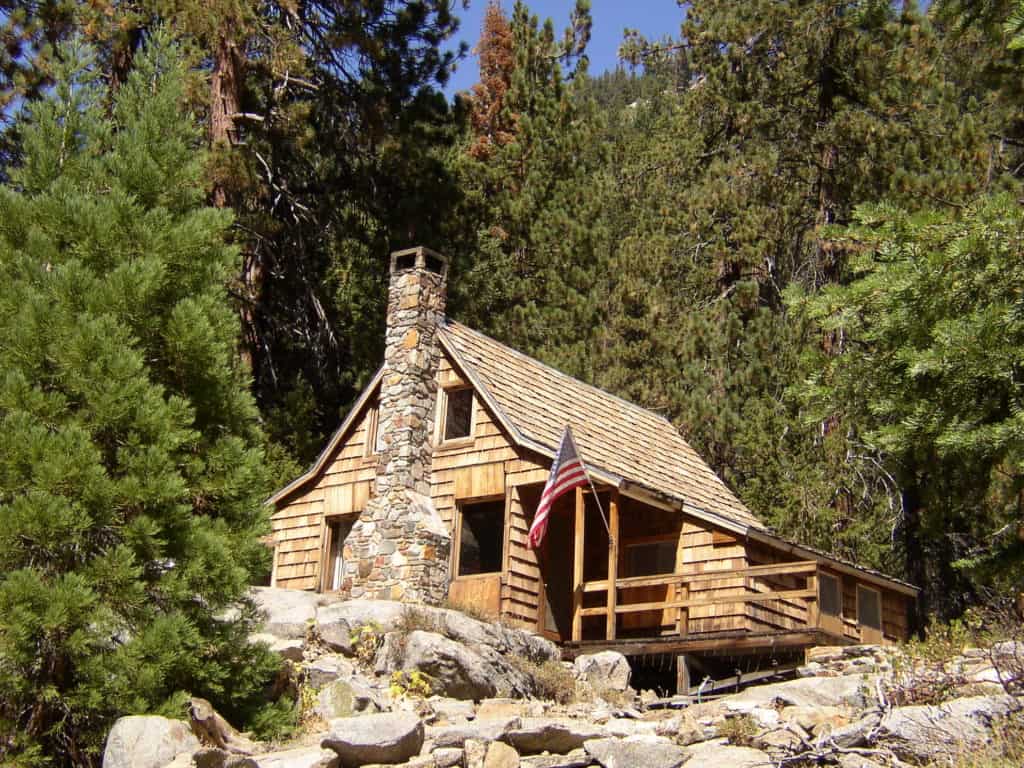 The Dixon cabin was one of the several private cabins that sprang up in the 1920s. It was built in 1926 by Lou Coole and his wife as a summer vacation home. Purchased in 1950 by Van and Mary Dixon, the cabin has been carefully restored and maintained by the Dixon heirs.

The Dixon cabin was built in the typical rustic Mineral King style, with vertical board and batten siding and a cedar shingle roof. In addition to Atwell Mill lumber, boards from orange crates were used in its siding. It was a two-story structure, larger than most of the community’s cabins. The cabin originally had a fireplace and chimney built from local stones. An external stairway provided access to the second floor.

The 1950s brought many improvements to the cabin, including an indoor bathroom and an extension allowing the stairway to be enclosed.

The 1920s were an active time for the Mineral King community. A new hotel was built, boasting a dining room and a bath house. The road was widened and the grade improved. Water was piped to the resort cabins, and an electric generator was installed. There was another attempt to “make it rich” by using new technologies to extract gold from Mineral King ore. The first battle to make Mineral King a part of Sequoia National Park raged. In 1928, in response to a Forest Service order, all the cabins were painted in colors ranging from pink to purple, earning the community the title of “the cleanest town in the state.”

The increased publicity, improved road, and greater amenities resulted in a surge of visitors to the Mineral King resort. With encouragement from the forest service, there was a corresponding increase in construction of private cabins adjacent to the resort. The Dixon cabin was one of these additions.

Lou Coole and his wife built their cabin in 1926. Lou’s wife and their daughter Mary Lou were frequent summer visitors. In the summer of 1946, the Coole’s teenage son went on a day hike to the Mosquito Lakes with two friends. He and one boy hiked ahead of the third. According to a dictated account, ” ….[t]hey waited for him to catch up; when he didn’t show up, they went back to look for him.When they couldn’t find him, the two boys returned to the cabin, as it was dark by then. A search party began the next day at dawn, and they found the boy–he had jumped across the trail, hit his head on a rock and died. They brought the body back to the cabin. The next summer, the Coole family went to cabin, opened the door, turned right around, walked out and went home–the memories were too painful.”

The Cooles did not return to the cabin, and in 1950 they sold the cabin to Van Dixon. In the following decade, Van and his wife Mary made several improvements to the cabin.They added a bathroom, nailed redwood shingles over the board and batten siding, and extended the North wall four feet to so that the stairway could be inside. They also rebuilt the fireplace and chimney, using Mineral King stones.

Two families have made active use of the Dixon cabin as a summer residence.Very little is known about the Cooles, who resided in the cabin for two decades. Lou Coole and his wife built the cabin in 1926. They had at least one son and a daughter, Mary Lou.

Four generations of Dixon family members have made heavy use of the cabin since its purchase in 1950. Van and Mary Dixon came up to Mineral King for the first time around 1929, on invitation from a school teacher friend. The Dixons were active members of a community of educators from the Los Angeles area who settled in the Faculty Flat community in Mineral King. They used the Bates cabin until they purchased the Coole cabin in 1950. As school teachers, Van and Mary Dixon were able to live at the cabin all summer, every summer, from 1963 until their deaths in 1995 and 1991, respectively..

Their daughter Shirley Dixon Devol has been at Mineral King every summer except two since 1933, when she made her first visit at 6 months old. Her children, Sharon and Randy, have summered at Mineral King every year since their birth (1953 and 1957). The cabin has also been visited frequently by Van Dixon’s granddaughters Kathy Hath (who was married at the cabin in 1996) and Kristy Conrad and their families. Trevor Tavares, Nicole Devol, and Genevieve and Matthew Conrad constitute the fourth generation to visit Mineral King.