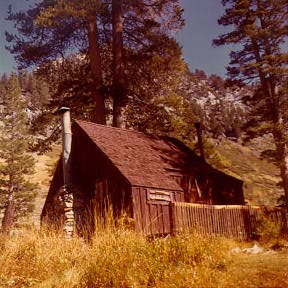 The Fleek Cabin is one of the oldest, least-modified cabins in Mineral King. Historians believe that the cabin was built circa 1890 as a miner’s cabin. In 1906 the cabin was purchased by Frank Mixter, a prominent California politician. Prior to Mineral King becoming a part of Sequoia National Park, the deed was transferred to Janet Fleek, Frank Mixter’s granddaughter.

The Fleek cabin retains much of its original structure, and as such is a valuable representative of the Mineral King mining architecture. At its core, the cabin is a square, one-room frame structure with vertical board and batten siding. The foundation is typical of the area, consisting of wooden posts set on rocks. All original boards used in cabin are believed to have come from Atwell Mill.

In the late 1920s, the front door was replaced by a fireplace, and a kitchen and front porch was added. In the 1930s, two lean-tos were added to make room for beds. The cabin still contains no interior bathroom facilities.

In 1906, the Fleek Cabin was considered an “old miner’s cabin.” Its one square room contained only a double-bed and a wood stove. In the summer of 1906, it was visited by Frank Mixter and his wife Ollie, who had recently moved to Exeter from San Francisco. They decided to purchase the cabin to use as a summer retreat.

In subsequent summers, the Mixters traveled to Mineral King in a four or six-horse wagon with their four young children. The family had to unload the wagons at steep sections, and carry their baggage themselves. The trip took two days.

The children slept in a tent on a wood platform near the cabin. Food was stored in a large cooler hung from a tree. Family members recount a year in which a bear ripped open the cooler and took all the supplies the first night of the summer. The residents had to live on fish for a week until supplies arrived.

In 1912 and 1914, the Mixter family expanded with the birth of a daughter and son. Yet, it wasn’t until the late 1920s that the cabin was improved and expanded. At that time, Frank and Ollie’s oldest son Norbert added a fireplace, a kitchen, and an open porch.

In the 1930s, the wooden platform was dismantled and two lean-tos were added to the cabin to hold double beds. The cooler’s demise came in the late 1950s when an ice refrigerator was hauled up.

Frank and Ollie’s fourth child, Tom, became a co-leasor of the cabin with his mother in the late 1940s. In 1973, the cabin title was transferred to Tom’s daughter Janet Fleek.

Frank Mixter was a pharmacist in Visalia, Exeter, and (in the summer months) Mineral King. He also had a distinguished career in the California legislature, serving as both State Senator and Assemblyman from 1922 to 1944. Frank married Olive (Ollie) Pogue in 1897.

Frank’s wife Ollie first visited the area in 1889 at the age of 13, while on a 3-week backpacking trip. Her family believes that she and her sister Eva were the first Caucasian women to to travel over Sawtooth Pass. Ollie and Frank first visited Mineral King together in the summer of 1905 or 1906.

Information on site structure and history was derived from the Mineral King Preservation Society files.