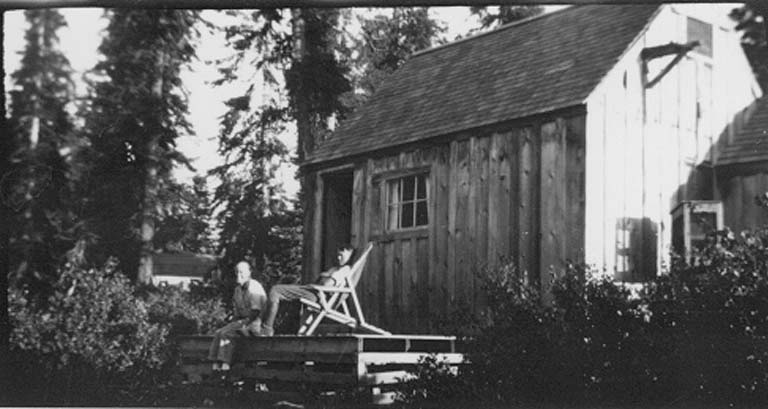 Felix Foreman immigrated from England in 1885 and first settled in El Dorado County. After a few years he met and married Canadian born Jane Dunlop in El Dorado County; three sons followed – Felix, David and Edgar O.. After many years of camping in Giant Forest and Mineral King, Felix and Jane Dunlop Foreman built their cabin in 1910. Felix was then the superintendent of the Ohio Lemon Company in Lemon Cove. Felix and Jane moved to San Francisco in 1920 so it was 1927 when the cabin was sold to Norbert and Mabelle Mixter. (Norbert son of Francis and Melvina Pogue Mixter)

The cabin was damaged, along with many others, in the 1932 severe winter storms. Norbert rebuilt using basically the same plan but enlarged it a bit. Norbert now had a new cabin and the permit for same. Norbert passed away in 1981. In May 1983 a propane explosion destroyed the Botkin cabin, which was just below the Mixter Cabin. Bob Mixter (Norbert’s son) and Michael Botkin jointly approached the Park Service to request an exchange that would allow Michael to assume the Mixter’s permit. It was to all parties’ advantage: Bob did not have to remove the cabin at his own expense; Michael did not have to rebuild on the Botkin’s original site;  the Park acquired more open green space next to a meadow. This transaction bought the cabin owners time to pursue historical designation while still under the 1978 restrictions and ultimately, after achieving historical designation, the legislative effort of 2004 allowed transfer or sale of permits. The permit transfer took place in 1985. Michael and Jana Botkin are the current residents of the cabin.

Footnote – When private property ownership became available in Silver City, Felix and Jane’s son, Edgar Foreman, purchased his lot in 1932 and built his cabin. Edgar’s son, Harold Foreman, built his Silver City cabin in 1961. To this day Felix and Jane’s descendents are enjoying spending some summer time vacation in the Mineral King valley. Thank you Diane Gladieux for the submission of this cabin profile!