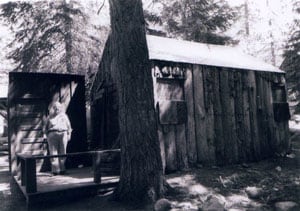 The Hammer-Cochrun cabin has been the summer home of the same family since Charles and Alice Hammer built it in 1928. Through four generations, the cabin has evolved in typical Mineral King fashion, expanding to accommodate a growing family. In 1958, the cabin permit was passed down to the Hammers’ daughter Beatrice and her husband George Cochrun. Due to the careful stewardship of the Cochruns, the site has maintained its integrity despite extensive damage to the main cabin in the winter of 1969.

It was a typical summer in the 1930s. Charlie Hammer awoke early Monday morning. The cabin was dark and very cold, and his wife Alice was still asleep. Their children Bea and Bub were sleeping in another room, thanks to the addition he made to the cabin in 1932. Charlie slipped outside at 6:00 a.m. and started his car. After another weekend at Mineral King, he was in a hurry to get down to Visalia where he ran a company that supplied irrigation pumping equipment to San Joaquin Valley farms. Charlie drove rapidly down the steep, narrow, unpaved Mineral King Road, braking only when he absolutely had to around the dangerous curves. He walked through the door of Handy’s Restaurant in Visalia by 7:15. He was at the C.J. Hammer Machinery Company at 8:00 a.m. This was a remarkable feat, but not unusual for Charlie who held the record for the fastest round-trip on the twenty-two mile Mineral King Road. One hour and forty-five minutes for a drive that takes many of us well over two hours today!

One Day with a Case of Jack Daniels

When Charlie stepped out of his cabin in the 1930s, he was already a familiar fixture in Mineral King. He and his family had been spending their summers there since 1923. Initially the Hammers lived in a tent. In 1928, encouraged by the Forest Service, Charlie and Alice built a cabin in the Mineral King community known as The Gate in West Mineral King.

The Gate is a community of 24 cabins, most dating from the 1920s. Enos Barton, a miner, built the first cabin in the area in 1873, and the new community was initially known as Barton’s Camp. The area was also called The Gate after a nearby gate that was built in the 1870s as a part of a fence to help hold the miners’ stock in the valley. The gate survived into the 1930s. The community became known as Faculty Flats when a group of Southern California teachers built cabins there in the 1920s and 1930s.

The original dwelling was a one-room cabin—a frame structure with vertical board and batten sliding and a shake roof. Charlie and Alice used rough lumber from Atwell Mill. They built a privy nearby using similar construction techniques.

The new cabin may have seemed luxurious after tent living, but it probably began to feel small very quickly. In 1932, they added two bedrooms. Between 1939 and 1942, perhaps prompted by the marriages of Bea and Bub, they added a rear bedroom and bathroom, as well as a pavilion, an outdoor fireplace, and a bunkhouse. The bunkhouse is a unique, eye-catching structure. It is constructed with vertical planks covered with bark, and has small windows near the corners. According to their daughter Bea, the bunkhouse “was built in a day with a case of Jack Daniels.” Although the workers were onsite for two days, they were presumably in no condition to do any work on the second.

Now that the Hammers had a cabin, Charlie joined in the Mineral King ritual of ‘opening’ the cabin in the spring. Opening is the process of dismantling the various precautions put in place in autumn to help prevent damage from snow and freezing temperatures during the winter. It also typically involves repair of the snow (and sometimes bear) damage that seems to occur inevitably, despite the precautions.

When Charlie went to Mineral King in June of 1929, he was accompanied by four other men who were opening their own cabins. Charlie, Abe Dinkins, Walter Parr, Edwin (Pappy) Hart, and Hugh Hart turned the event into a social affair, eating meals and playing cards together. This became an annual tradition known as the Mineral King Stag Party, held the first snow-free weekend in June at the Hammer cabin. After the electricity was installed, the revelers were able to “get lit up” under the lights of the pavilion.

The participation in this celebratory event expanded, reportedly exceeding 75 at its peak. The event became somewhat more structured, and the Stag Party had a President and a Secretary-Treasurer. Bea was the only woman invited to attend. The party was held at the Hammer cabin for 40 years.

In 1958, Charlie and Alice handed the cabin permit over to Bea and Bub. Bea and Bub, with their families, carried on the Mineral King traditions passed to them by Charlie and Alice. Charlie died on New Years Day in 1964. Alice died in April 1969. A couple of months after Alice passed away, Bea and George returned to Mineral King.

The snowfall that winter had exceeded all historic records. By February, there were already fifteen feet of snow pack in the Mineral King valley. Then another storm hit, with snow falling as fast as four inches per hour. The storm triggered a series of major avalanches that had a profound impact on the valley, destroying the store/post office and several cabins.

The family cleaned up the bunkhouse and made it their primary living area while they sorted through the debris. The family retained any material that could be reused, including the windows. The rear bedroom and the bathroom were mostly undamaged and were retained. According to her son Larry, Bea “was adamant that the ‘indoor plumbing’ be saved.” Some of the cabin material was not salvageable, and Bea later told how she “burned the old wood in the outside fireplace with a heavy heart and many tears.”

The Hammer-Cochrun cabin epitomizes the continuity that makes Mineral King a historic, living community. For four generations, the same family has made the cabin its summer home, and the cabin retains important associations with the early summer use of West Mineral King.

Charles (Charlie) and Alice had close associations with the West Mineral King community since 1923. They lived in Visalia, and escaped to the mountains in the summer. Alice and their two children, Beatrice (Bea) and Harold (Bub) typically spent the entire summer at Mineral King.

Charlie was founder of the C.J. Hammer Machinery Company of Visalia, which still exists. He was a member of the Visalia City Council from 1935 to1943. During that period, Charlie was also the Mayor of Visalia for one term. He spent his weekends at Mineral King. He usually drove up the Mineral King Road on Friday evening, bringing Chinese food for dinner. He returned to work early Monday morning.

Charlie is said to hold a couple of speed records on the Mineral King road, one for round trip on the road (1 hour 45 minutes), and one for heading down to Visalia. Charlie’s record isn’t uncontested, however. Some claim Walter Long shares the roundtrip record. According to Charlie’s grandson Larry, “if the truth be known, Jack Hill (previous owner of the Matoon Cabin) might have broken the record or been a close second” for the downhill speed record.

Charlie was heavily involved in the Visalia Sportsmen’s Club, and was involved with the stocking of fish in the lakes and streams in the Mineral King area. The Hammers were avid fishers, and were known for their pack trips into the backcountry to fish. On one trip to the Little Five Lakes, they packed in wood to build a permanent campsite on ‘Long Lake.’ The remnants of this site can still be seen today.
Beatrice and George Cochrun:

Beatrice (Bea) married George Cochrun in November 1939. They had two children: Charles Floyd and Larry Allen. Bea became permit holder with her brother Harold in 1958. In 1977, Bea became the sole permit holder because the Forest Service wanted only one name on the permit. Bea and George carried on the community rituals started in the late 1920s. They entertained 15-20 people each summer and hosted the Stag Party at their cabin until 1969. Bea was Secretary-Treasurer of the Stag Party for 20 years and received an award of appreciation from the members.

Harold (Bub) married Mattie Joe Linnell in February 1941. They had three children: David, Daniel, and Douglas. Harold was a permit holder (with his sister Beatrice) from 1958 to 1977. Harold and his family enjoyed the cabin for short visits each summer. Harold was President of the Stag Party.

Larry married Mary Buragino in 1969. They had two children: Ann and Paul. The Hammer-Cochrun cabin is their primary residence in the summer. Anne and Paul spent many of their childhood summers at the cabin with their grandparents.

Larry remembers accompanying his grandfather, Charlie, on one of his famous fishing pack trips to the Hocket Lakes area. He recalls “many fish were caught, many beverages consumed, and a lot of stories were told.” On that trip they sent Larry “out into the middle of a lake to fish in a rubber raft. The raft was leaky and filled with water…” Larry ended up having to swim for shore.

Much of this cabin profile is based on reminiscences and stories provided by Larry Cochrun. Thank you for your contributions to the preservation of this piece of history.

Information on site structure and history was derived from the Historic Resource Inventory compiled by J. Elliot and S. Hack and written testimony provided to them by Beatrice and George Cochrun.

Additional background was derived from the following sources: