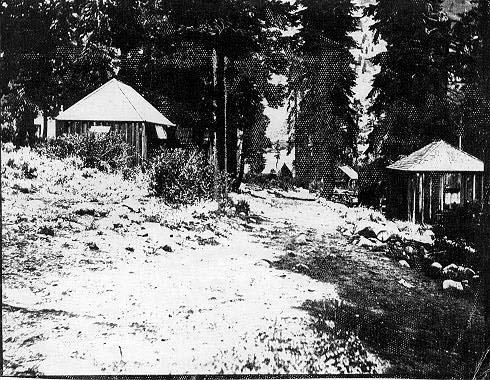 The Runciman cabin was built shortly after the San Francisco earthquake in 1906 by the Mt. Whitney Power Company. The cabin served as a summer residence for Archie J. Robertson who had supervised the construction of several dams in Mineral King. The site is significant both in its associations with the construction of hydroelectric resources and in the retention of its historic appearance.

The Runciman cabin was built in a style reminiscent of a bungalow. It has the features typical of the local architecture, including a foundation of wooden posts set on rocks, a rectangular frame structure, vertical board and batten siding, and a wood shingle roof. In addition, it has a bungalow-style clipped gable and a gabled dormer. The cabin has a rear facade built around a pine tree and open front and rear porches. Atwell Mill lumber was used in the entire construction.

The cabin was destroyed by snow slides in 1932. It was rebuilt using the same material, and the historic appearance was retained. The only outbuilding on the property is a front gable, board and batten privy.

The Mineral King basin holds the head waters for the Kaweah River. Since the beginnings of agriculture in the Central Valley below, the Kaweah River has provided irrigation for crops. In the late 1890s a group of Visalia businessmen planned for a new use for the river; the generation of electricity. After rounding up money and support, they formed the Mt. Whitney Power Company.

The company’s first projects were construction of a power station above Three Rivers, and running a flume from Oak Grove to the power plant. In 1897 the company purchased Atwell Mill and cut a million board feet of lumber for the flume. In 1902, having cut all the timber that was needed, the company sold the mill. Lumber subsequently cut at the mill was used in the construction of many of Mineral King’s early cabins.

The company was concerned about the flow of water during dry years. Consequently, in 1904 and 1905 the company cut new trails in the mountain sides above Mineral King and built five dams. People concerned about irrigation in the Central Valley below sued the Mt. Whitney Power Company, and the court ruled against the construction of any more dams. The company was allowed to continue using the dams that they had completed, however.

The man who supervised construction of the dams was Archie J. Robertson. In the summer of 1906, after construction of the dams had been completed, the company built a small cabin on the main street of the old mining town of Beulah in the Mineral King Valley. Archie used this cabin as a summer residence until 1932 when it was seriously damaged by snow slides. He sold the property and the wreckage to Leon Cunningham of Lindsay.

Leon rebuilt the cabin in 1933, recycling material from the original. In 1938, the cabin was sold to the Runcimans, who are the current permittees.

Archie J. Robertson was the superintendent of construction for the dams above Mineral King in 1904 and 1905. Some time after construction was complete, Archie became Superintendent of Substations for the Mt. Whitney Power Company. In 1914, one of his jobs was to open the head gates at the Monarch Lake and Franklin Lake dams.

Information on site structure and history was derived from the Mineral King Preservation Society files.